Rather than try to keep everyone up-to-date on my "happenings" via emails and long phone conversations, I'm going to post a monthly update here. Stop back often to see what new projects I'm digging into!

I'm excited this week to announce that I'm working on two new books that will be published in 2008 -- although I'm not sure of the exact date. While my agreement with the publisher won't allow me to provide a lot of details, I can say that I'm writing two books (for kids ages 9-12) ...each book will highlight a popular music star. One is a very popular hip-hop artist...the other a well-known rapper. My deadline is January 31, 2008, so I have a lot of work to do in a short time...but it's going to be a fun experience, I'm sure.

On the article front, well, I'm going to have to slow that pace down a bit while I focus on the book deals. For the past few months, I've been writing a lot of articles on a variety of subjects and sending them out for consideration in publications. For the most part, though, I've been digging into interviews with some really fantastic Christian music artists. Since July, I've hung out/talked with Leeland, Kutless, and Grey Holiday. (Their articles already appear on CBN.com, and will also appear as the cover story for several issues of Credo magazine next year.) In the next few weeks, I'll be adding Sanctus Real, Michael Gungor Band, and RE:ZOUND to that list. Just this week, I also had the great fortune of speaking with Dr. Gary Chapman about his Love Languages for Children book. I'll be taking his information and developing a few articles for publication.

Back to the book front...two books that I contributed to were released in October. One Year Life Verse features my daily devotional for a day (I can't remember which one!) in July. The other book, Along the Way for Teens, is a super book that's a collection of true stories that are sure to inspire our youth. My chapter "Three Moments of Glory" is the first chapter in the book!

And then there's all that other stuff that would fill up too much space in a blog...additional book chapters, greeting cards, a permanent spot with a quarterly magazine and the possibility of a column with a large teen magazine. 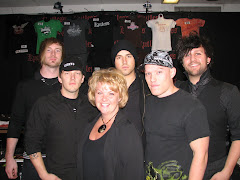